Are security staffs legally obliged to give their SIA number on request?

March 17, 2015 − by SFS Ltd − in News − Comments Off on Are security staffs legally obliged to give their SIA number on request? 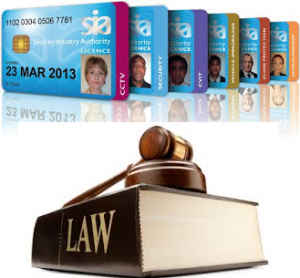 One of the main duties of the Security Industry Authority (SIA) is the compulsory licensing of individuals working in specific sectors of the private security industry.

Once granted a licence by the SIA, the holder must wear the badge so that it can be seen by members of the public. This is a mandatory licence condition and attracts serious consequences for the licence holder if not respected: SIA can issue the person with a written warning, which can be taken into account in future licensing, can revoke or suspend the existing licence or can even prosecute the person for contravening licence conditions (criminal offence under Section 9 of the Private Security Industry Act 2001).

Displaying a photocopy of the SIA licence instead of the original licence is not permitted.

There are a few situations where security staffs are allowed to work without displaying the SIA licence: when working undercover, when having reported to SIA the loss or theft of the SIA licence.

Generally, when a person displays a badge, this serves for identification of that person to anyone else (e.g. the utility meter reader, doctors, nurses). That is why members of the general public often think that they have a right to obtain on request the name and/or the number of an SIA licence holder. However, security staffs sometime deal with violent people, so being identifiable to anyone would just make their safety vulnerable. To offer them protection, s19 of the Private Security Industry Act 2001 specifies that only a relevant person (licensing officer, SIA inspector or constable) can require a security staff to produce the SIA licence to him.

Therefore, the general public does not have a legal right to receive the name or SIA number of a security staff. The purpose of displaying the SIA licence is not as an identifier, but as proof that the wearer has the right and the training to do that job.

Using unlicensed security operative is an offence, so companies employing SIA staffs must have the relevant documents and do regular licence checks for them. The goal of the SIA scheme to make all security staff traceable and liable for their actions is achievable by tracing them through the companies they work for.

SIA will only deal with reports concerning illegal activities: working without a licence, breaching of SIA licensing conditions or any crime they have committed which might have an effect on their licensable status. Therefore, the first point of contact when wanting to complain about a security staff should be the company he is working for. They will be investigating the complaint.

A great deterrent to crime, security staffs provide peace of mind and a sense of security to a business owner, employees and customers and should always be customer service ambassadors.